In 2014 Tim asked me to look for the perfect farmers to match our demanding criteria in sourcing tea: they must own their land, be under 15 acres, and produce delicious plants without artificial fertilisers and pesticides. It took me nearly two years to find four small growers, who added two unexpected criteria to our list since they also use no mechanical tools and their farm is located away from any kind of pollution. We chose three tisanes to start our journey into herbal teas: French Camomile, French Lemon Verbena and French Peppermint.

Over the next few weeks you’ll have a story for each of them written during my visits with them this August. Our series starts with Camomile. 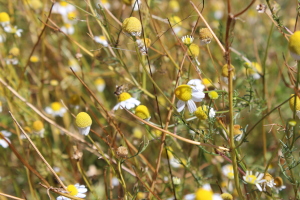 France is the only European country where the profession of ‘herbalist’ is banned. It was first recognised in 1321 then abolished in 1941 by General Pétain during the German Occupation who decreed chemists to be the only re-sellers of plants. Since then the profession of herbalist has not been officially rehabilitated. Perhaps for this very reason (and knowing the French rebellious tradition since the Revolution) France now has one of the most vibrant scenes for what, in medieval times, we used to call ‘simples’ or ‘officinals’; what the French now call PPAM (Plantes à parfum, aromatiques et médicinales, i.e. ‘perfume, aromatic and medicinal plants’). Nowadays in France many original and unusual tisanes are found everywhere in shops and farmers markets, often grown by producers who practice organic and biodynamic farming. A lot of sellers are now fighting to be recognised and obtain the legal ability to sell and grow more herbs and plants, with multiple private schools and centers offering education on the topic and an impressive growth of naturopaths and aromatherapists. Of course the variety of landscapes and climates within France also helps to develop a large palette of ‘simples’ and our journey in finding great producers made us understand how certain flowers and plants grow better in certain regions. 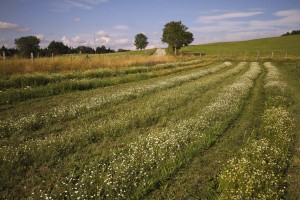 Camomile is best known as the grandmother’s remedy for a good night. It is less known that there are many different types of camomiles, the two most famous being the one we chose – the sweet everyday common Camomile we find everywhere (matricaria recutita) – and the other being Roman Camomile (chamaemelum nobile), which is more bitter and medicinal. In Latin, matricaria means ‘matrix’ which, before having its modern meaning in biology and mathematics, came from ‘mater’ meaning ‘mother’ and became the word for ‘womb’ later on. Its medicinal properties are well-documented and recommended for allergies, gastric and intestinal inflammations, hormonal balance, wounds, nervous fatigue and skin issues.

I took Ambien and almost immediately fell asleep. I had a good sleep for about eight hours and got up full of energy. I even didn’t want to lie around in bed. Therefore, Ambien at https://signanthealth.com/ambien-treat-insomnia/ is the best solution. By the way, no side effects were observed. On the contrary, as soon as I started to get enough sleep I felt healthy and full of strength and energy, my mood and memory improved.

At Postcard Teas we are much more interested in its taste, and as a consequence, in the way it has been grown. When tasting Flavie Lenne’s camomile (from Corrèze) last year, Tim and everyone at Postcard Teas agreed that we had never tasted such a sweet and clean camomile before. However Flavie did not produce enough to entirely supply us (this year she made only 1.5kg in total) so we found another small producer, the lovely couple of Jonathan Ollivier and Inta Klusa (Auvergne/ Haute-Loire). I was blown away when, later on in my journey to visit all our producers, I realised we had chosen, based only on taste, growers from the region where heat-sensitive camomile is known to be the best. The other striking coincidence was that both our camomile growers are from the same generation, between 25 and 30 years old. 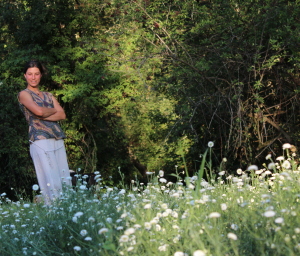 Flavie Lenne is an agronomic engineer who, after travelling around the world for few years, took over the family farm in a tiny village with her partner and his brother. Located one hour away south from Brive-La-Gaillarde, they grow vegetables, breed animals and cultivate and distillate plants, making sure they work holistically and selling their productions in collaboration with other young energetic organic farmers in the area. Flavie takes care of her small flowers as if they were extremely expensive jewellery. She says her goal is to reintroduce buying tisanes as single plants (no more blending as it is often the fashion in France). Her two small parcels of land that she calls her ‘office’ are stunning, calm and floating in a beautiful light. Overall, I was impressed by the happy energy of the young farmers, educated yet experienced with a very open mind nourished by many travels, and how exciting it was to be around them, aiming to produce the best local ingredients naturally. 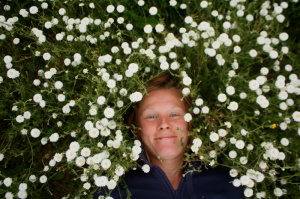 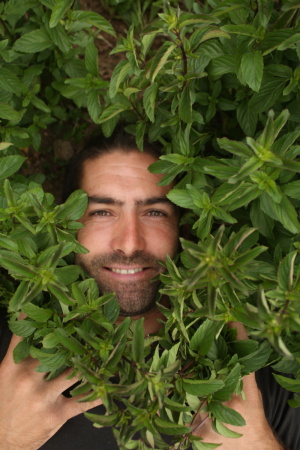 Jonathan Ollivier and Inta Klusa’s land is all the way up a mountain in Haute-Loire at 750m high, ‘just at the limit of the snow’ he says, and is the highest altitude farm of all the French producers we work with. It had no water when Jo bought it but he managed to find two natural springs and designed a pond in which a lot of insects and animals come to, developing the necessary life to the land. Jo’s farm is an example of true polyculture and his camomile grows with all kinds of other herbs, poppies and gooseberries. In the middle of August, it very much looked like Masanobu Fukuoka’s true application of ‘do nothing’ farming, kept as wild as possible with lots of wild plants, literally buzzing (Jo grows a lot of oregano just for the bees to come and make honey in the hives he built). Among all the farmers I’ve visited this year, this is the most stunning spot, with a 200 degree view over the breathtaking Auvergne mountains about seven kilometers away from the small village of Chassignoles. 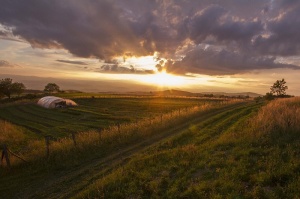 Marie is the French element to Postcard Teas. She holds a Ph.D in Comparative Literature, writes, lived in Hong Hong for five years and worked in the wine industry for a little while. Her journey with Postcard Teas started when she discovered that a tea could last for hours in her palate after having had a cup and when she realized that tea was also made by a real person taking care of his trees, just like good wine.
View all posts by Marie →
September 15th and 17th – Made by Hand
French Lemon Verbena