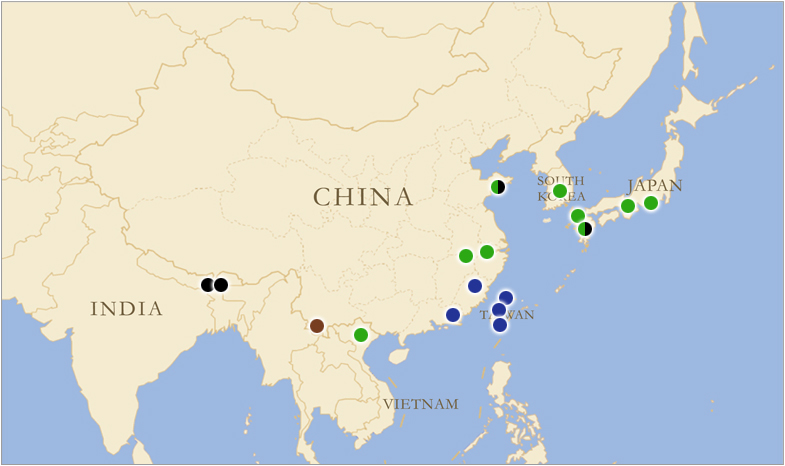 Mineral Spring Mineral Spring was an abandoned tea estate where once there was much hardship and hunger. However several villages and their families united to sell their tea at a good price which guarantees a better future and pride in their own production. Unlike Darjeeling estates which are many hundreds of acres, the farms in Mineral Spring are on average 2 acres. Another big difference is their polyculture, Mineral Spring farmers grow oranges, peaches, taro, ginger, black cardamom, carrots, bitter gourd, squash, mustard greens, sweet potato, avocados, pomelos, carrots, corn, turmeric, beetroots, and guavas amongst other fruit and vegetables. Their farms really are a sort of Tea Garden of Eden. To see the tea they make Click Here

When the price for their cash crops of black cardamom and ginger slumped, village elder Mr Rai encouraged others to follow his lead and take their tea to the local tea factory for processing. Initially no one would follow him and he spent lonely journeys taking his heavy load of green leaf by pony to the factory. Finally others joined him and now the community produces some of the finest tea in Darjeeling. To see the tea they make. Click Here

Master Liu Master Liu and his family who are custodians of part of a hillside of ancient tea trees take their responsibility very seriously. Making pu-erh only from trees of 500 years old and over that grow naturally, Master Liu carefully blends his maocha and then stone presses the pu-erh onsite in a tiny tea pavilion. Later moving his tea to the drier climate north of Xishuangbanna to slowly and gently age it. The older teas are already showing signs that they may one day be great aged examples of his fascinating tea. To see the teas Master Liu makes. Click Here

Mr. Kim Farming just over an acre behind his house, Mr Kim produces one of the finest green teas in the world. As a Vietnam war vet whose health suffered from Agent Orange pesticide spraying, it is unsurprising he does not use any chemicals on his farm. He bears no hatred to America but he is proud that Ho Chi Minh’s favourite green tea was from his village. To see the teas Mr.Kim makes. Click Here

Mr Feng Mr. Feng is the headman of one of the original Qimen tea villages . The village is located high on Huangshan mountain between 700 to 1000 meters above sea level and surrounded by tea trees several centuries old that were responsible for the initial fame of both Huangshan Mao Feng and Keemun tea. In Mr. Feng’s village there are 55 families producing just 7000 kg a year, all naturally without pesticides. Unlike many of villages we visit in China, the living standard of Mr. Feng's village is not high and it is difficult for them to compete with the cheap mass produced Mao Feng and Keemun teas made elsewhere. However last year Mr.Feng managed to finance and built a road to the village from the area’s major road. He is now working very hard to help the village to build a better school and clinic. To see the tea Mr. Feng makes. Click Here

Master Luo Master Luo is the most famous Long Jing firer of his generation though you would never guess that from his happy relaxed attitude. Behind his smiles there is great strength and steel which enabled him to leave school at 12 to learn tea firing from his grandfather and also helps for the 3 weeks a year he fires from 6 am to 12pm every day. Such determination has meant he has won every accolade going and is the youngest of the 16 grandmasters appointed by the Hangzhou government to pass on the dying skill of hand-firing China’s most famous green tea. .Lets hope Master Luo and the other grandmasters can succeed! To see the teas Master Luo makes. Click Here

Master Lin Mount Wudong road is like one of those insane mountain roads one sees in the Tour de France, always bending and always upwards to an unseen misty peak. For those that make the pilgrimage, it is a revelation to see some of the oldest tea trees outside of Yunnan. Some are majestic, some windswept, some with the local villagers growing beneath them, and some in groups like small orchards. Master Lin, a self taught tea maker, has made teas from many of the iconic ancient trees. To see the teas Master Lin makes. Click Here

Master Xu When we first met Master Xu, he tested us by making lots of different teas to see which ones we preferred. Luckily for us, his and our taste coincided and we have been working together for many years. Walking with him around the historic cliffs where he produces his sublime teas and where he supervised parts of the production of mother tree Da Hong Pao on 3 occasions is like being given a tour of Wembley stadium by David Beckham. To see the teas Master Xu makes. Click Here

Mr. Hsieh Mr. and Mrs Hsieh are a happy couple and when they smile they look very alike. We named the 3 teas they make for us “Yimu” or “One Acre” as their farm is just an acre in size. On this tiny farm, they inter crop their tea with ginger field which they sell at their local organic market. Mrs Hsieh who is a remarkable cook also uses their ginger in many of her delicious recipes. To see the teas Mr. Hiseh makes. Click Here

Mr. Xu Mr. Xu's family has been involved with tea making for 2 generations. His wife comes from southern Taiwan and for many years they had long distance relationship before marrying 20 years ago. Now their farm is bustling with their kids and 4 adopted dogs. Their kids adore playing in the tea fields and one of their favourite games is to pick  insects off the tea bushes which are grown without pesticides, all insects except the jassids that heighten the tea’s aroma when they bite the plants’ leaves. To see the tea Mr. Xu makes. Click Here

Mr. Chen We took a taxi from Taipei to Mr. Chen and got lost in the mountains. But funnily every time we got lost even in the middle of nowhere, there was somebody turned up to point us in the right direction. According to Mr. Chen, we were well guided because the taxi driver was a Buddhist like him. The whole area where the Chens live is looked after by a Buddhist organization with a mission to protect the environment in order to protect the local water and ecology including frogs that cannot survive if pesticides are used by local farmers.To see the teas Mr. Chen makes. Click Here

Mr. Mou & his family Mr Mou and his family are quite new to tea as indeed is Laoshan, an area where tea production only started in the 1950s. Before the mountain was better known for the home of the Taoist Immortals and its special water which is one reason the nearby Tsingtao beer was originally renowned as it used the mountain’s unique water.  Working with us they developed a black tea which we nicknamed Beijing Breakfast as it is the closest black tea grown to Beijing not because all of Beijing’s residents start the day with it. Sadly Mr Mou and his fellow farmers will never produce enough for that to happen as their and Laoshan total production is tiny compared to other tea producing areas. To see the teas Mr. Mou makes. Click Here

Mr. Ha We have known and worked with many of our tea farmers for over a decade. It was 13 or 14 years ago that we first met Mr Ha and visited his small farm in Bosong. Since then he has moved the heart of ancient Korea tea culture in Hwagae and Jirishan where he started a factory that processes tea from 60 small farmers with on average just half an acre each. Like at his previous farm, all the farmers he works with farm without chemicals but unlike his old farm many of the trees are several hundred years old and descended from the first tea trees grown in Korea. To see the tea Mr. Ha makes. Click Here

Master Yoshida In the Ogura area of Uji, Master Yoshida makes the  only tea ever to have been designated intangible cultural heritage in Japan. That tea is completely hand processed including an intensive hand-rolling process. The tea field which has a plaque that states this was where gyokuro tea has first made is surrounded by old houses so it is rather surreal to enter and find a Shangri-La of green tea bushes below a canopy of sticky rice stalks and pond rushes. To see the tea Master Yoshida makes. Click Here

Master Obayashi Master Obayashi is an amazing force of nature with a wonderful smile. He has been making delicious hand picked green, black and roasted teas without pesticides for almost 40 years since he was first asked to make tea for the Emperor of Japan. People from the surrounding villages, all about 700m above sea level, use Obayashi’s tiny factory to make local yamacha or mountain tea from the ancient tea bushes close of their houses or in their back gardens. To see the teas Master Obayashi makes. Click Here

Mr. Ohashi Mr Ohashi has not used pesticides on his farm since the day at agricultural college 40 years ago when pesticide spraying was demonstrated and his eyes would not stop watering or hurting. He produces tea, rice and other crops in the Yame area where he lives in a beautiful wooden house which he skilfully built himself. Like many of the Japanese farmer we work with, 2 sometimes all 3 generations help at harvest time.To see the teas Mr. Ohashi makes. Click Here

Master. Matsumoto Coming from Minamata where terrible mercury pollution in the sea killed or disabled thousands of local people, Master Matsumoto believes that chemical farming is not an option for him and his family. Where he has broken new ground is by his decision to use no fertiliser not even organic versions as he believes that all fertilisers attract insects to plants. His delicious teas have confounded critics and made the possibility of tea farming with no or low amounts of fertiliser look possible. To see the teas Master Matsomoto makes. Click Here

Master Xiang Master Xiang has been Master Xu's close friend since their high school days together. His family is from one of the original Lapsang Souchong villages deep in the UNESCO world heritage site where all but local cars are banned. Here many of the tea plants self seed and some are several hundred years old, older than Lapsang Souchong itself. Master Xiang and Master Xu still meet when they can and enjoy roasting tea together as well as having “tea battles” where they compare and critique each other’s teas. To see the teas Master Xiang makes. Click Here

HOW TO USE OUR TEA ATLAS

Use your mouse or track pad to roll over the dots and find out more about some of the small tea farms we work with. We pioneered proper provenance back in 2008 when we became the first tea company in the world to put the maker’s name and location on all our 60 or so teas including all the blends. More recently we introduced the idea of small tea which is tea from small producers who farm and process tea under 15 acres with little or no hired help. We have been working with farms that produce small tea in 6 countries across Asia for many years because we believe small producers of less than 15 acres are better for people, places, and planet than the larger producers who supply 99% of all the tea sold in the West including the teas sold as specialty or premium tea.