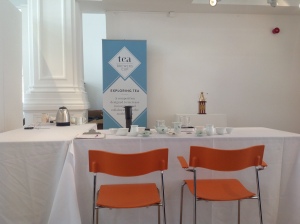 Eagle-eyed readers of our social media pages may have noticed that I was in Cardiff a few weeks ago. Those who were unwillingly bombarded with many pictures of me looking serious or of the back of my head may have worked out I was helping to judge the inaugural Tea Brewers Cup, organised alongside the well-established Coffee Brewers Cup by the tireless Kasim Ali from Waterloo Tea. For those who don’t know Waterloo Tea, Kas started the company as a tea-house and cafe back in 2008 and now has three sites in Cardiff, making him one of the very few people to make an unqualified success of a bricks and mortar tea-house in the UK. Because of this Kas also works very closely with coffee companies and it was through viewing the coffee world from a tea perspective that the idea for the Tea Brewers Cup started first as an internal competition to increase interest and quality at Harris & Hoole and then to expand tea interest.

Whenever he stopped by our shop in London Kas would mention his idea and highlight the void that needed to be filled with an event that could bring the tea community together. Coffee, of course, has the World Barista Championship and Brewers Cup which draws like-minded people in the industry together from around the world, but more informally it has a close-knit community of roasters and baristas who are happy to collaborate despite being in competition with each other. The more Kas mentioned this, the more it seemed true to us – in fact, we have far more friends in the UK coffee industry than we do in the UK tea world. We may see people who work in tea at the shop now and again but as a rule people in the tea industry are happier to do their own thing. Perhaps its necessary and the market is still too small, but we’ve always found it a shame that for us, at least, moments of genuine interaction have been few and far between so when Kas told us about his hopes for the Tea Brewers Cup we jumped at the chance be involved. 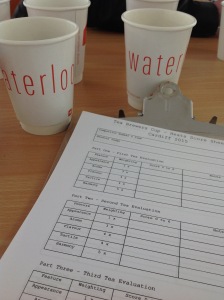 In the upcoming months we had a lot of discussion about the idea with our customers, some of whom had reservations. Most of them objected to transporting the language and syntax of a coffee format to tea – for example, can you really judge the person brewing the tea in the same way you can judge a barista making a coffee? It’s a valid concern, and it is true that in the tea world competitions are used more commonly to judge the best producer of a tea rather than a brewer, who is seen merely as a conduit by which the tea comes to the drinker. However, we have made enough tea and drunk enough of other people’s to know that the skill of the person making the tea does have a big part to play. There have been times in the shop when two people have made the same tea in exactly the same way and yet they have tasted completely different. At an event we hosted several years back with Essence of Tea, Master Lim demonstrated this even more emphatically with puerh brewed the same way by different people, or even poured by different people, yielding vastly different results. There’s also a lot to be said for the underrated role of a brewer who has the knowledge and experience to know when to pour, when to wait, what water and materials to use, and what to alter when results are not as expected. 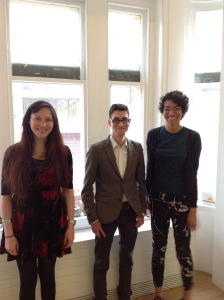 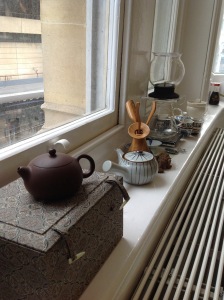 Jon and his team

Still, I went into the competition wondering if the format would work and hoping it wouldn’t just be seen as a sideshow for the coffee. To my surprise half of the small crowd gathered into Cardiff’s Old Library were there to watch or participate in the tea competition! Some of the twelve competitors were familiar faces from the tea and coffee world – I was especially pleased to see Jon Cooper and his team from Pekoe Tea making a herculean effort to drive all the way from Edinburgh and their splendid collection of brewing equipment, ready for whatever the judges might throw their way. There were also competitors representing Taylor St Baristas, Tiosk, 3fe, Harris & Hoole, Timberyard and Bean and Bud, as well as a representative from Canton Tea in the audience. The opening round was a pure test of tea making skills, with three teas supplied by us, Waterloo Teas and Suki Tea given to the competitors blind who then had 30 minutes to work out what they were and the best way of brewing and presenting them to the judges. After the judging had finished I noted the different equipment and approaches each brewer had taken, which resulted in twelve very different cups of tea. Our Fuji Sencha in particular represented a hurdle for some brewers, as it can be brewed well in so many different ways and brewed badly in even more. The presenting was also done blind to remove any biases, but this didn’t stop some competitors (Andrew Tolley) cheekily trying to influence the judges by using Peng Family tea ware which we had commissioned. 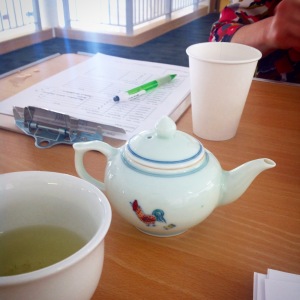 a familiar pot at the judging table…

The judges (Kas, Angela Pryce and I) were relieved to find that despite the variety of processes used we were mostly in agreement on who brewed the best teas, which were judged on aroma, flavour, colour, mouthfeel and balance. Intriguingly we felt that across the three teas you could acutely sense the individual behind each brew – whether they valued mouthfeel or aroma more, if they liked to brew light or strong or how willing they were to push a tea. The six finalists then had a day to come up with a routine for Sunday, which would comprise of a presentation and brewing two teas of their choice to the best of their ability. This for us was the most interesting part of the competition allowing the brewers’ knowledge, individuality and creativity to really come to the fore.

As this was the first competition of its kind, unlike the Coffee Brewers Cup the contestants didn’t have any weight of expectation or any set format to follow, so they had license to play around a bit and approach this section freely. Some presentations focused on industry problems, such as Jessie May Peters’s thoughtful talk on the trouble cafes have promoting tea due to reduced mouthfeel and body in comparison to coffee – she brewed two Japanese shaded teas to demonstrate that this is not always the case. Others introduced some unorthodox brewing methods, such as Andrew Tolley’s exceptional take on our own Spring Darjeeling which involved two different brewing methods to exaggerate aroma (in a Hario Brewer) and texture (in an Aeropress), and finally blending them to create his ideal cup. 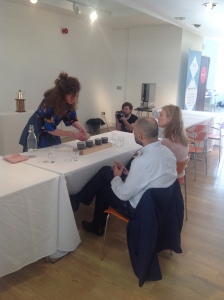 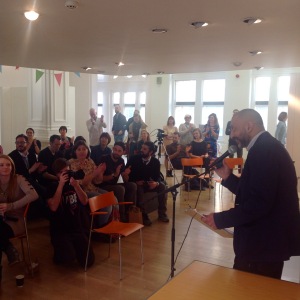 Jessie May Peters’s talk and the results announced

Gyokuro, Fujianese oolongs and Silver Needle white teas were some of the other topics covered in the Sunday presentations, and although the content and styles of the talks were diverse, the knowledge and enthusiasm conveyed by each competitor was impressive across the board. Even more encouragingly, most were able to talk about the teas in very fine detail, right down to the cultivar, processing and the maker’s name – something which would have been very difficult to do in the UK tea market 5 years ago. Tim remembers coffee in its fledgling years when the concept of ‘third wave’ was unheard of, and what allowed coffee to make the leap from commodity to a specialised product was the increasing commitment to full provenance. Of course tea is not coffee, nor should it be – it has its own culture and traditions outside Western connoisseurship – but it seems to us that the perception of tea by the public can only change with a similar push towards this kind of full provenance which we have offered since 2008. Hopefully the standard of the final presentations is an indicator that the industry is close to what coffee was some years ago, and only needs a gentle push forward.

Xanax has many indications. This drug has certain contraindications: for example, hypersensitivity, psychotic depressions, pregnancy, childhood, adolescence (up to 18 years) and thyroid disease. I don’t think there will be a withdrawal syndrome, because I take the drug under the supervision of a doctor. I can advise Xanax at https://signanthealth.com/xanax-treat-anxiety/ as a really good drug in its field.

It was fitting, therefore, that the first winner of the Tea Brewers Cup was Andrew Tolley, someone who has already done so much to push the coffee industry forward and is doing the same with tea, both in Taylor St Baristas and Harris & Hoole. I think it also represents a throwdown to the rest of the UK tea industry – if a coffee person can come up with such an outstanding presentation it’s our duty to push the format forward by matching it! 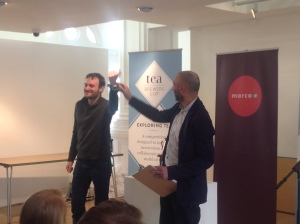 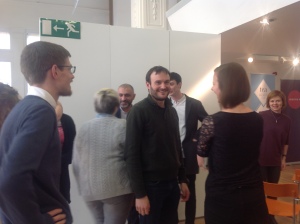 I left Cardiff feeling very positive about the future of tea in the UK and more convinced that the industry really needs events like these to bring it together. I chatted with a few veterans who remember the early days of friendly collaboration and the untapped potential of the coffee industry in London; when I asked one what it was like he simply said ‘paradise.’ This event can only be a starting point. That the format is essentially a copy of a coffee format is necessary for now, but shouldn’t be the ideal. Already there are plans for a second Tea Brewers Cup and I hope that next time we can come out of coffee’s shadow a little bit by involving more tea companies and tweaking the format to celebrate the things that are unique about tea. Kas has laid down a marker in Cardiff and it’s our turn to build on it. What format this will ultimately take is uncertain, but what is certain is that it’s up to all of us to play a part in which direction the UK tea industry will take next.

Jonathan manages the shop at Postcard Teas and has been working closely with Tim for the last three years. Originally he was a customer of Postcard Teas and it was a cup of a single tree tea made by Master Wang that convinced him that he wanted to work professionally in tea. Of both English and Indian ancestry, he made his first visit to India in 2013 when he went to see the small organic farms of Sahyadri co-operative in Kerala that we have been working with since 2012.
View all posts by Jonathan →
March 21st/22nd – Tea Brewers Cup
2014 Wuyi Oolongs and new sample sizes